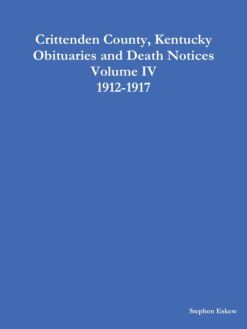 Tragedy of The Hunt

Charles CAMP, 12-year-old son of D. D. CAMP, a farmer living south of town, was accidently shot Thursday by his older brother while they were hunting. The child was wounded in the head and physicians say he cannot survive. The older boy, who was carrying the gun, fell and the weapon was discharged.

Anthony L. BROWN died Dec. 19th and was buried the 21st at Repton. A large crowd was present at the funeral. Bro. GIBBS preached a very comforting sermon. The bereaved ones have our sincere sympathy.

A. L. BROWN, a well known citizen of the Mattoon section, died Wednesday Dec. 20th, and was buried Thursday at the Repton cemetery. He was a member of the Repton Baptist church, was sixty years of age and survived by his wife and six children, four sons and two daughters.

Rev. W. R. GIBBS and wife went to Repton, Thursday Dec. 21st, he being called there to preach the funeral of Dock BROWN, who died at his home near the Caroline HUGHES iron bridge on the day before. Rev. GIBBS and wife returned on the afternoon train the same day.

A letter received here last week we are informed, conveyed the intelligence of the death of Mrs. J. J. BENNETT at Dade City, Fla. She was a daughter of Mrs. Susan GLENN, of this city and a sister of Mrs. Albert BUTLER, of Salem, and was well known and much loved by many friends here.

Several from here attended the burial of uncle Dock BROWN which took place at Repton Thursday.

There were many moist eyes when it became known Monday that Grace CLEMENT, daughter of H. O. HILL and wife of Jamie CLEMENT had crossed the dark river, leaving a little babe 2 weeks old and her young husband. She had been seriously ill for the past week and little hope was entertained for her recovery. Her remains were laid to rest in the Chapel Hill cemetery Tuesday, and her pastor Rev. A. J. THOMPSON, officiated.

The death of Mrs. Mary GETTINGS Saturday afternoon at the home of J. N. DOLLAR where she has been boarding since last June, was not wholly unexpected to her friends here, as she had been in failing health for several months though few realized that she was at the point of death until Saturday morning when her condition became alarming and it was seen she could last only a few hours.

Mrs. Mary GETTINGS, an aged and respected widow of Fredonia, died last week. She was an aunt of Dr. G. W. STONE of this city, and formerly a resident here.

Mrs. Jordon THURMAN died Dec. 27th and was buried at the Caldwell Spring cemetery. Rev. BOARD, of Flat Rock, held a short service at the grave.

Mrs. Mearl WILSON, who has been ill for quite a while, died Friday morning and was buried Saturday.

Mr. DEVERS died at his home near here Saturday morning and was buried Sunday.

M. E. FOHS went to Louisville last week to attend the funeral of Mrs. Lena BALDAUF, the mother-in-law of Julius FOHS. She died at the latters home in Lexington, but was buried in the family lot in Louisville.

Mr. and Mrs. Grant BUGG and daughter, Virgie of Fredonia, were here Wednesday accompaning the remains of Miss Mayme HENRY who died at their home in Fredonia early Tuesday morning. They were accompanied by Mrs. James LOWERY and Mr. and Mrs. Ira BENNETT and son, Ivan.

W. L. VENNER and wife who were called to Corydon, Ind., last week on account of the illness and subsequent death of his mother have returned home and are now dispensing I. C. information and tickets at the depot.

Pathetic indeed was the hope which buoyed her up, and prolonged her life to allow her to reach home and then close her eyes and peacefully breathe her last surrounded by loving sisters and brothers. Such was the fate vouched to Miss Mamie HENRY, who had been for the past month in the Ozark Mts in hope of being benefitted. Last week when she continued to grow weaker and her physician held out no encouragement she expressed a wish to return to Kentucky. Her relatives here were notified and A. M. HENRY, a brother went to Cassville, to accompany her and assist Mrs. BUGG who had been with her ever since she went West for the benefit of her health. James Seth HENRY another brother went to Evansville Saturday to meet them but they were delayed and did not pass here until 11 o'clock Monday enroute to Fredonia. Soon after reaching the home of her sister, Mrs. Grant BUGG she began to sink and did not rally, the end coming at 1:15 A. M. Tuesday just 12 hours after she reached there. The remains were brought here Wednesday morning and were taken to the home of her brother James Seth HENRY on Salem street and from there to the 1st Baptist church at one o'clock where the funeral was preached by Rev. Martin MILLER. He paid a beautiful tribute to the memory of the noble christian character who has gone to her reward. The interment was beside the mother and father who so recently preceded her to the grave under the mound of beautiful flowers sent by many loving friends and some by the teachers of the Graded school where she formerly taught, the scholars whose affection she won by her tender solicitude of them while under her care, the Baptist church where she gave her pure young life to her saviour, the S. S. of which she was a regular attendant all her life and from numerous friends of the family.

G. L. RANKIN for many years a merchant of Weston, died at his residence in that place Sunday night of abscess of the lungs. He is survived by his wife who was Miss Geraldine WILSON, daughter of Geo. WILSON, of that section and by several children, one daughter, Miss Madge being now in Arizona for her health and one son, Earle, now in Cedar Rapids, Iowa. Telegrams were sent to them Monday. Gertrude, another daughter, is at Evansville and Wilson, a son, at Cairo, J. P. RANKIN, the oldest son lives near Mt. Zion. The other 3 were at home, George L., Jr., Jerry and Dick.

He professed faith in Christ a number of years ago, and was of Baptist faith.

He died Monday morning at 3:45, Jan. 8th, 1912. On account of the severe weather and bad roads, was interred at Weston for the present, and will be removed to Mt. Zion later.

Alf HARDIN who lived 3 miles from Marion near the Crittenden Springs road died Friday night January 12th of a congestive chill presumably. He was sick only 5 minutes. It may have been acute indigestion. He was up and well and ate a hearty dinner after which he busied himself getting in the night supply of firewood. He was engaged at this when he complained to his wife of his back and stomach hurting him. He laid down before the fire to warm himself and was dead in 5 minutes. His wife who was a daughter of Grant CROW, was the widow of LEMON and they lived on the Dr. SWOPE farm near Crittenden Springs Road about 3 miles northwest of Marion.

Geo. Fielding WOOLFE, son of John T. WOOLFE, the well known Tolu miller, died at noon Jan. 12th, 1912, he had been in failing health several years. Last fall his father went to Shelby, Miss. after him and removed him to Tolu where they arrived Nov. 12 just two months before his demise. He was born in 1877 and was 35 years of age. He is survived by 3 brothers, Cleve of Berea, Ky., Elmer and Byron of Houston, Texas and two sisters, Mrs. Hugh GLENN of Houston, Texas and Mrs. W. H. PORTER of Berea, Ky. He was to have been married it said this spring.

The stork left Willie YOUNG two boys last week, but we learn later that one of them died.

Alvin DUFFY's little baby died a few days ago and was buried at Crayne.

Mrs. Eva CRIDER, wife of Frank CRIDER, died at her home near Marion with pneumonia fever, Jan. 14th, 1912. She leaves a husband six daughters, namely--Gertie CRAYNE, Mertie BRADLEY, Ida JAMES, Etta, Vera and Veldar; also three sons--Marsh, who lives in Washington; Guy and Ulice. She was buried at Piney Fork on the 15th. A large crowd attended the funeral. Rev. BOUTCHER preached a very comforting sermon. The bereaved ones have our sincere sympathy.

Mr. and Mrs. W. O. TUCKER, of Marion, came up last Monday to accompany the remains of Miss Mayme HENRY to Marion, where the funeral and burial took place Tuesday.

Quite a touching tribute to the memory of Miss Mayme HENRY was the visit of several of the teachers, of the Marion school, to the bereaved family on the day following her death.

Miss Isabel HOWERTON went to Princeton Sunday to attend the funeral of E. M. JOHNSON, who died suddenly on Saturday, of acute indigestion.

Mrs. Eva CRAYNE CRIDER, died at her home near Marion, Sunday, Jan. 14th, with pneumonia fever. She was sick only a few days. Everything was done for her that the doctor, kind and loving hands could do, but God calls his own from earth to Heaven.

She was born Jan. 9th, 1864. Was married to D. S. F. CRIDER March 8th, 1881. To this union was born nine children, all of whom are living. Her husband and all of her children were with her through her sickness and at her death, but one son, Marsh, who lives in Washington and could not get here.

We keenly realize that in the death of Str. CRIDER we have lost a dear wife, a good mother and a true friend. We known too, our loss is her eternal gain. She professed religion and joined the Baptist church at Piney Creek about twenty-five years ago, and a little more than two years ago she moved her membership from that church and united with the C. P. church at Piney Fork where she remained a faithful and consistent member until her death.

The funeral services were conducted at Piney Fork, Monday, Jan. 15th, by the writer after which she was laid to rest in her family graveyard at Piney Fork to await that resurection morn.

Creed TAYLOR left Monday for Ardmore, Okla., to attend his sister, Mrs. Maude HARDWICK, who lost her husband by death Sunday. We have not learned the particulars of Mr. HARDWICK's death or burial, but as he was a Kentuckian his remains may have been brought to Dixon his old home for interment. Mr. TAYLOR is expected home in a few days.

Sol WORTHAM, a well known colored man, who drove a mule team, and hauled water for the towns people, died last week and his remains were taken to his old home at Water Valley, Graves County, Ky., for interment.

Walter GUESS, of near Princeton, a son of The GUESS, who a flagman on the I. C. railroad, was killed Monday at Wheatcroft, Ky., when he was struck by a train which mangled him so terribly that he died later while enroute to the hospital. He was about 25 years old and well known here. The interment took place Tuesday afternoon at 3 o'clock at Bethlehem, Caldwell county.