The PRESS is indebted to Mr. J. H. Walker for the following list of names of Crittenden county's forty oldest citizens. The figures at the right is the age of each. There is probably no man in the county more conversant with its early history, especially in a biographical way, than Mr. Walker. There are very few of the old families whose history for generations is not stored away in his remarkably retentive memory.

You omitted one of forty old men in your last issue - B. M. G. Heath, (Uncle Sam), 79 years, and strong probability of another one more. 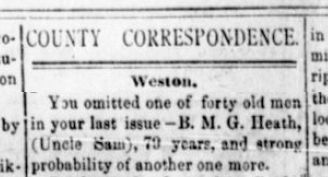