THE PLOT THAT FAILED

THE PLOT THAT FAILED.

John Pendleton was a widower at last.  I say at last, not because said John Pendleton had any desire to be a widower, far from it.  He was very much devoted to his dear departed helpmate--but I say it because she had threatened so long to leave him so and had succeeded only in the last week.

Yesterday they had taken her from her home and laid her to rest in the little village churchyard and her bereaved husband was now sitting alone and sad in the desolate home, thinking drearily of the events that had led to the death of his dear wife, and his sad bereavement.  Mrs. Pendledon was very stout, and although she complained often and threatened as I have before stated to leave Mr. Pendleton a widower, he firmly believed that he had kept her with him as long as he had by making her believe that fat folks did not die.  She of course, protested against his version of the matter, and yet, so great was her confidence in his wisdom that he believed she might still be with him if she had not been undeceived.

It came about in this way.  News came to town that Jack Thompson, from the country, had died, and Jack also was fat.  When Mr. Pendleton heard of it he said that his wife must not learn of it and although he did not tell her himself, he neglected to warn his neighbors against the act, and so it happened that their next door neighbor, the widow Smith, called over and imparted the news to his wife, and when he came in from his office his wife greeted him with the intelligence that she had told him all the time that fat folks could die.

To be sure that was quite twelve months ago, but Mr. Pendleton felt that he could never forgive the meddlesome widow for being the indirect cause of his dear wife's death.

While he was thinking along this line he fell to studying why the Widow Smith had done this vile and cruel deed--what motive she had in so doing.  When suddenly an idea came to him that made him spring to his feet and clench his fists in great wrath.  "At last," he muttered, "at last I have solved the mystery.  Scheming Widow that you are, you did it because you wanted me yourself.  But my fair Widow, for once you will see your plots fail," and shaking his fist toward the Widow's defenseless cottage he hissed, "I say your schemes shall fail for once.  You shall not have me, I vow it.  You shall not have me!"

The weeks went slowly by and ripened into months and the busy cares of his office together with the soothing hand of time partly healed the wound made by the death of his companion, but there was still a feeling of enmity at his heart against the Widow, who had caused all his woe.

A year rolled by and as Mr. Pendleton was still in his prime, he was persuaded by his friends to give up his solitary life and mingle more with the people.  And when at a reception at the home of a friend, his hostess bade him take the Widow Smith out to supper.  He thought as he made his way to her through the crowd, "I see she has begun her intrigues.  No doubt she hinted to the hostess that it would be very agreeable with her, etc.  I guess you think you have got me now my Fair Schemer, (For of course I will have to make myself agreeable tonight,) but we shall see who wins in this little game."  And although he felt very bitter towards her he felt that his duty to his hostess bade him remain by her side the rest of the evening.

It must here be confessed that Mrs. Smith was a very handsome young widow, but of course, all her charms were lost upon our wronged Hero and yet they talked quite amiable all the evening and many were the knowing glances cast in their direction.

At the close of the evening Mr. Pendleton felt it to be his duty to escort the Widow home.  It would be ungentlemanly to let her go unescorted, when he lived next door, and he would not be ungallant because of a--well perhaps, unintentional wrong--we should not judge.

Two evenings later as Mr. Pendleton was on his way home from his office he came up with the Widow Smith just returning from shopping and she carried several packages.  He very politely offered to carry her bundles and walked by her side to her gate and was cordially invited in to tea.  Of course he know not how to refuse, and besides this was so much nicer than taking his tea alone, that accepting a very kind invitation he very often went over and drank his tea at the little table presided over by the bright face and pretty white hands of the Widow Smith.

It began to dawn upon Mr. Pendleton that it would be much more pleasant to have some one to preside over his table at home, and the more he thought upon the subject the more feasable [sic] the idea seemed until at last he decided to put his fortune to the test, and so, one night he walked over fully decided upon his course of action, his little speech already made and upon the end of his tongue.  He kept repeating it over and over to himself as he strolled along.  He was faultlessly arrayed and he felt quite satisfied with himself and the world.

He made another effort.  "You see I came over tonight."  "Certainly," she smiled.  "I have been thinking, ahem!  Mrs. Smith will you marry me," he blurted out recklessly.  Mrs. Smith looked duly surprised.  "Marry you," she exclaimed, "Why Mr. Pendleton, I am very much surprised, and grieved.  I hope you do not think I have encouraged you, that is I hope I have not led you to believe that I would marry again.  No, Mr. Pendleton, I shall never marry again.  I hope you will not -----."  But Mr. Pendleton had shot out the door and was half way down the walk.  When he reached his own gate he turned and shaking his fist menacingly at the widow's innocent cottage, he muttered between his teeth, "Ah! You scheming Widow, I said from the beginning that you should not have me, and, I repeat it, YOU SHALL NOT!" 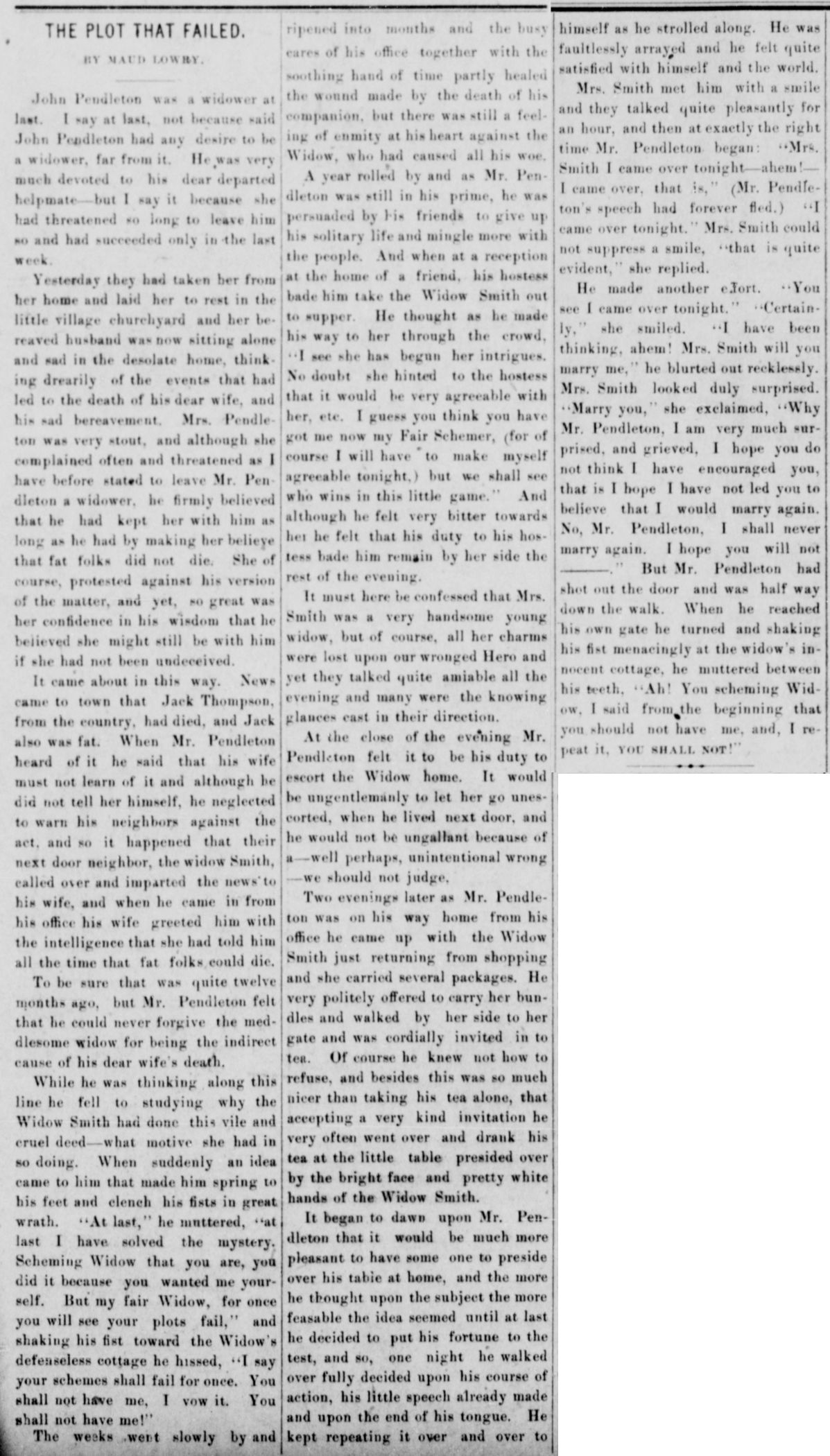