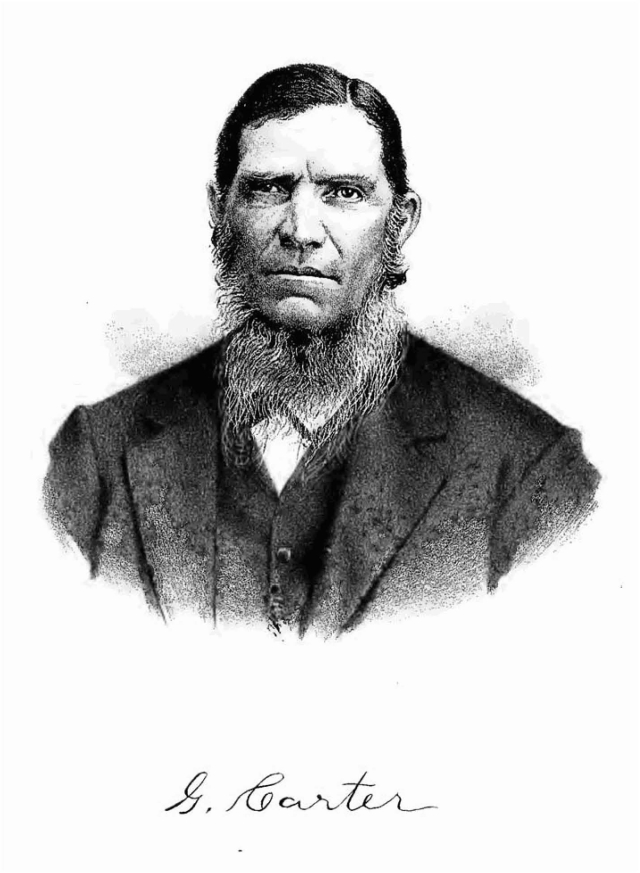 GARLAND CARTER was born in Logan County, Ky., April 16, 1827, and is a son of William L. and Roda (Scott) Carter. William Carter was born in Virginia, came to Kentucky when a young man, and settled in Logan County, fourteen miles east of Russellville. He was killed by lightning in 1843, and at his death was sixty-four years of age. The subject of our sketch was left at the age of sixteen with a blind mother and five sisters dependent upon him for support, but he went at his task with a will that is seldom equaled by boys of that age. He managed to give his sisters a fair education, but having but little time to spare to go to school his own education was greatly neglected. Subject's mother was a daughter of Moses Scott. Moses Scott was also a native of Virginia, but in an early day immigrated to Tennessee, settling about seven miles from Nashville, where he pursued the occupation of a farmer until his death, many years after. Mrs. Carter, subject's mother, left Logan County in 1857 and went to Texas, where she lived until her death in 1872, at the age of eighty. Our subject is the eighth of a family of ten children--four boys and six girls--whose names are as follows: Eliza, Frances, Merry J., William L., Roda, Harriett, Mary Ann, Nancy and Joseph; four of the above number are dead: Eliza, William L., Harriett and Joseph. Subject spent his youth and early manhood in his native county farming, commencing as a renter. In 1857 he moved to Crittenden County and bought a farm of 165 acres, to which he has made additions at different times until he now owns 1,100 acres, --one of the finest stock farms in the county. Mr. Carter farms quite extensively, but makes stock raising his specialty, in which he has been very successful. He was married May 14, 1853, in Logan County, to Miss Adaline Davis, daughter of William and Patsy Davis. Ten children have been born to Mr. and Mrs. Carter: Thomas H., James W., Sallie A. (wife of Ira C. Hughes), Joel L., Keturah L., Garland D., Adaline D. (deceased), and three infants (deceased). Mr. Carter belongs to the Universalist Church, and in politics votes with the Republican party.