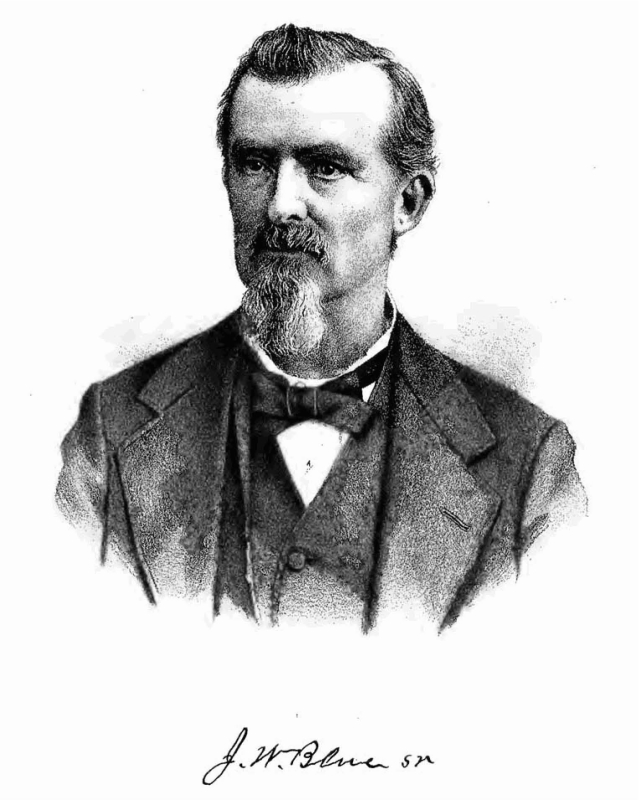 J. W. BLUE, Crittenden County, attorney at law, is a native of Union County, Ky., and a son of Solomon and Mahala (Kearney) Blue, both parents are natives of Virginia. James Blue, subject's grandfather, left Virginia as early as 1803, immigrating to Kentucky and settling in what is now Union County, where he died about 1811 or 1812. He had been a soldier in the war of the Revolution, holding the commission of captain in the American army. Subject's maternal grandfather, John Kearney, was a native of Virginia also. He distinguished himself during the war of Independence as a major in the American army, serving throughout the entire struggle. His death ocurred in Virginia, some years prior to 1803. Solomon Blue was a farmer and had been a soldier of the war of 1812; he died in 1867 at the age of eighty-four years. He was for many years a colonel of the State militia. His brother, Uriah Blue, belonged to the regular army, held the commission of colonel, and fought through the Seminole and Florida war, and was with Gen. Jackson at the battle of New Orleans. Favorable mention is made of him in the Life of Jackson. He died in Mobile, Ala., while in command of the garrison at that place. His wife, Mahala (Kearney) Blue, died in 1831 at about the age of thirty-five years. She was the mother of six children: a son who died in infancy and Reuben B., Margaret S., Mahala, James B., and subject. In 1836, he was married to Mrs. Eliza Ralph. He left one child by her surviving him--Rachel Ann. J. W. Blue is the youngest of a family of six children. He was born August 24, 1828, and remained with his father until his eighteenth year. In his nineteenth year, he became a student in the LaGrange University, Oldham County, Ky., in which institution he remained for about one year. In September, 1847, he entered Cumberland College at Princeton, in which he remained four years, graduating in the class of 1851. After completing his literary education, he commenced the study of law with Barber & Ward of Princeton, under whose instruction he continued until 1853, when he went back to Union County. He was admitted to the bar, February, 1853, in the town of Morganfield, where he practiced his profession one year and then came to Marion, where he has since resided, being the oldest lawyer of the Crittenden County bar at the present time. Mr. Blue has been very successful in his profession, having a large and lucrative practice in Crittenden and surrounding counties. He was married November 4, 1851, in Princeton, to Miss Fannie M., daughter of Sharp and Mary (Prince) Baldwin of Caldwell County. Eight children have been born to this union, five of whom are living, viz.: Nonie, John W., Jr., Annie, wife of E. B. Krausse of St. Louis; Mattie and Fannie. The names of the deceased ones are Maggie, James and Solomon. In 1861 Mr. Blue was elected to represent Crittenden County in the State legislature, to which position he has been twice re-elected, in 1867 and in 1869, serving in all six years. In 1862 he was elected commissioner of public schools for Crittenden County, the duties of which office he discharged for ten years, resigning in 1872. Mr. Blue is a member of the Masonic fraternity, K. of H., and K. of the G. R. in all of which he has held positions of trust. He and family belong to the Presbyterian Church.