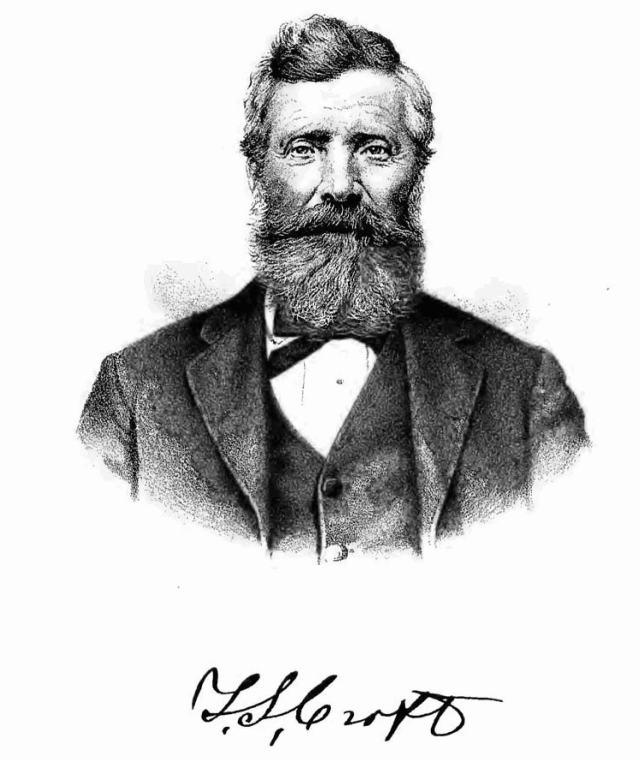 T. S. CROFT, Crittenden County, was born in Christian County, Ky., September 25, 1821, and is a son of Martin and Fannie (Sullivant) Croft. His parents were born in South Carolina, and his father was a soldier in the war of 1812. His grandfather, Frederick Croft, was born in Charleston in 1761. In 1806 Martin Croft came West and settled in Christian County, Ky., near where the present town of Crofton now stands. In 1826 he came to Livingston County, and made a settlement within four miles of Salem, and in 1834 he came to Hurricane District, where he resided until his death, September 15, 1834. Subject's mother died November 20, 1846. T. S. is the seventh son of a family of nine children, of whom three are now living: F. H., in this county; Margaret, wife of Josiah Stallions; and T. S. The last named remained at home until he was sixteen years of age, and then began farming on a part of the home place. He subsequently taught school in the home district for about five years. His first farm consisted of a tract of sixty acres, on which he lived for some length of time, and then settled on an adjoining farm, where he resided until 1864. In that year he settled on his present farm, where he now owns about 4,100 acres of land, with about 2,000 acres in cultivation. From 1860 to 1868 he was quite extensively engaged in saw-milling. In 1862 he began buying and rehandling tobacco, and followed it until 1875. He also engages in stock raising and trading quite extensively, and handles about 400 to 800 head per year. He was married October 14, 1847, to Miss Elmira Wright daughter of Thomas and Mildred (Holmes) Wright, of Tennessee. Mrs. Croft was born in Bedford County, Tenn., March 2, 1828 and to her and husband have been born eleven children, of whom seven are now living: Mildred, wife of G. B. Crawford, in Elizabeth town, Ill.; N. J., wife of James Yates of Webster County; G. T.; P. B.; Mary S.; Elmira and Buckner. Mrs. Croft is a member of the Baptist Church. Mr. Croft has been identified with the I. O. O. F.