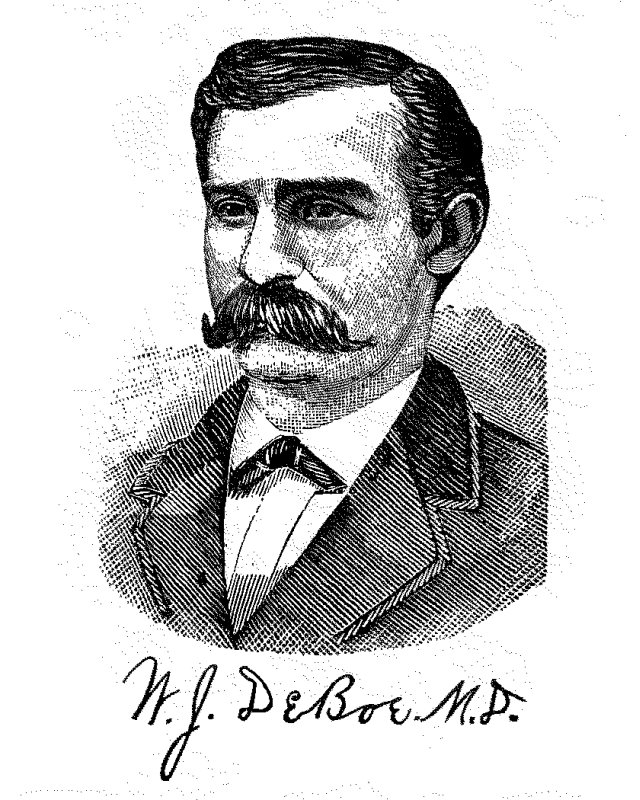 WILLIAM J. DEBOE, M. D., was born June 30, 1849, in Crittenden County, and is a son of Abram and Mary J. (Smith) DeBoe. Abram DeBoe was born in Virginia in 1817, and is still living, his home being at present in Caldwell County. He is a minister of the Baptist Church, preaching for a number of congregations. Subject's mother died in March, 1863. She was a daughter of Garland Smith, a native of Virginia, and an early settler of Crittenden County. Our subject is the fourth of a family of eight children. His early education was received at the common schools of the county and at Bethlehem Academy, which institution he attended several years. He commenced teaching in his twentieth year and continued the profession for seven years, having had charge of a number of schools in Crittenden and adjoining counties. In 1874 he became a student in Ewing College, Ill., where he remained two years, reading medicine during his vacations. In 1878 he entered the Medical University of Louisville, from which he graduated in 1881. After graduation, he commenced the practice of his profession in Marion, where he has since resided. Dr. DeBoe stands high in his community as a physician and surgeon, and has already achieved an enviable reputation, having a large and lucrative practice. He is a young man of fine abilities.